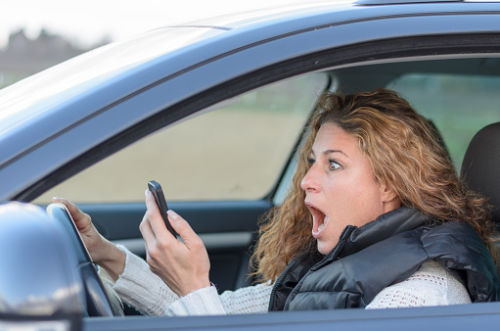 Everyone knows about the Breathalyzer test. It's what happens when you drink too much, stumble into your car, and get pulled over by the police. And you also know what happens if there's any reason police might suspect you have drugs in your car. If you see the K-9 unit coming your way, you're about to be sniffed out. Now you'll have to worry about the Textalyzer. Yes, you have it right. Texting may be treated like drunk driving offenses. With increasing car accidents on the roads leading to more injuries and fatalities, there's a push to come down on texting while driving.

I Know About the Breathalyzer, What Is a Textalyzer?

A Textalyzer is a device that can be used by police to tell if there was any texting activity during the period of time before you were pulled over. Here's how it works. If you get pulled over, the police would ask you to turn over your phone. The Textalyzer would tap into your phone's operating system to see if you had been texting or emailing while driving recently. It would not be able to see content, so your photos, emails, text content would not be accessible.

Who Came Up with the Textalyzer and Is It Legal?

Israeli company Cellebrite came up with the Textalyzer. They have been working with others as part of an effort to bring the Textalyzer to New York. Cellebrite is the company purported to have helped the FBI crack the iPhone. They also have already created a device for the FBI that can be plugged into a phone to pull out data. Penalties would be similar to OVIs and DUIs in that you would lose your license.

Many privacy advocacy groups such as the Electronic Frontier Foundation and the New York Civil Liberties Union have already come out saying the Textalyzer is unconstitutional because police can't force you to hand over your phone without a warrant.

Here is how it started. New York Senator Terrence Murphy and Assembly Assistant Speaker Feliz Ortiz partnered with Distracted Operators Risk Casualties (DORC), which was founded by Ben Lieberman. Ben Lieberman lost his teenage son, Evan, when another teenager who was texting while driving and crashed head on into Evan's vehicle. Lieberman made it his mission to do something about it. The senators are proposing a bill in New York that would make Textalyzer testing legal in New York. It is called "Evan's Law". If it passes, it would be the first state to allow police to do this type of testing on drivers they pull over.

Many privacy advocacy groups such as the Electronic Frontier Foundation and the New York Civil Liberties Union have already come out saying it is unconstitutional, saying allowing the police to force you to hand over your phone without a warrant is a non-starter. They have a point considering that the United States Supreme Court, in Riley v. California, ruled in 2014 that police need a warrant to search a cell phone. It remains to be seen whether the bill will get passed by the New York Legislature. If it does, it's likely to be challenged on constitutionality grounds in court, so only time will tell.

Can Police Use a Textalyzer in Ohio If I Get Pulled Over?

No, right now there is no legislation in place to allow a police officer to use a Textalyzer on you. It would need to pass through the Ohio Legislature, which would not happen overnight. However, if the legislation manages to pass in New York, then that could start a trend spreading to other states. After all, New York, along with California, is a trailblazer when it comes to new legal trends. Even so, there are significant constitutional concerns as to warrantless, illegal searches amounting to Fourth Amendment violations.

While you should not be texting and driving on the road, if you are pulled over by the police and get ticketed, or if you are in an accident, then the first thing you should do is contact an criminal defense attorney. If you are caught using a wireless device while driving, you face a $150 fine and losing your license for 60 days for the first offense. If you get caught again, your license will be suspended for a year and you will have to pay a $300 fine.

Find out more from Wolfe Legal Services about what the police can and cannot do if you get pulled over: