I live out of state and I needed someone to represent me to contest a speeding ticket charge I picked up while in Ohio. I always hope for a best case scenario but in life you don’t always achieve this. I was prepared to take a lesser charge but George worked his magic and pulled off a total dismissal of charges. I wouldn’t hesitate to recommend George to a friend, family or colleague. Thank you George for pulling off the best case scenario!  Citation

My experience with Wolfe Legal Services has been exceptional. I called Mr. Wolfe for advice based on a recommendation regarding a dispute with my landlord. He was able to answer all of my questions over the phone and give me the advice I needed to move forward without charging me for his services. His knowledge and expertise was extremely helpful and exceeded my expectations. I have since hired him and would definitely recommend his services to anyone.  Citation

This is a letter received from a confident client who obtained a civil protection order against her ex-boyfriend: 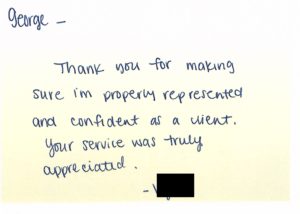 It's always nice to receive a thank you from someone who is confident in your work!

I was Mr. Wolfe’s client from early 2005 until the summer of 2010. During this time, he represented me and my mother in regard to a nasty probate guardianship case in Columbus. Though he was not able to get the guardianship terminated prior to my mom’s death in 2010, Mr. Wolfe, tried diligently to get this done. While working the probate case, attorney Wolfe also represented me as primary defense counsel in a bizarre criminal case out-of-state (South Carolina) involving false accusations against me pertaining to my 10-year-old 2nd cousin. Sure that I was innocent…and realizing that I could go to prison for life if convicted…Mr. Wolfe worked the case hard with another lawyer. After a 3-day trial, I was acquitted of all charges.  Citation

I known George Wolfe for many years. During that time he has handled a wide variety of different cases for me.

Attorney Wolfe’s ability to apply his experience and expertise handling my cases had me feeling confident and set me at ease knowing that my best interests were at the forefront. He is well educated, extremely knowledgeable and his high standards sets the bar for others to follow. Attorney Wolfe devoted the time needed and worked hard on all of my cases with passion and courage. He makes excellent recommendations as well as being an attentive listener.

Simply put, he is in it to win it.  Citation

George and Chris handled my probate Case in 2012 after I lost my sister. They Did an awesome job everything was done In a professional and efficient manner. I Will be forever grateful to them for their Services.  Citation

I used this attorney for a DUI OVI case in Columbus Ohio. He filed a Motion to suppress and ended up getting the OVI charge dismissed. I was totally satisfied because he wasn’t lazey and did a great deal of work on the case and it cost me $1,800 for everything.  Citation

We both felt George was knowledgeable, through, professional and reasonable. We will be in contact with him again as our needs dictate.  Citation

Mr. Wolfe is a great asset. He is reliable, dependable, and knowledgeable. Our last case was a law suit.  Citation

Attorney Wolfe’s ability to apply his experience and expertise handling my cases had me feeling confident and set me at ease knowing that my best interests were at the forefront.  Citation

I used this attorney for a DUI OVI case in Columbus Ohio. He filed a Motion to suppress and ended up getting the OVI charge dismissed.  Citation

Thank You for making sure I'm properly represented and confident as a client.  Your service was truly appreciated.  - Name Withheld.

I would highly recommend George Wolfe. He is a highly competent general legal practitioner.  Citation

Through George’s advice and hard work, I got my license back and the charge was reduced to reckless operation. I would definitely recommend George on a DUI case.  Citation

Thank you for replying to my e-mail on Monday, December 8, 2015.  It's a good feeling to know that you are willing to help someone without expecting anything and when we did my will I said we would do future business.

Sep
12
Don't fall for a social security scam which claims your SSN has been frozen. No government agency will call or email you and request payment in the form of wire transfers or gift cards. Read More
May
15
During the two hour period, you can ask the attorney who answers any legal question at no cost. Also get referrals to other resources in the community. Read More