Supreme Court is Asked: Can Police Force You to Take a Breathalyzer Test? 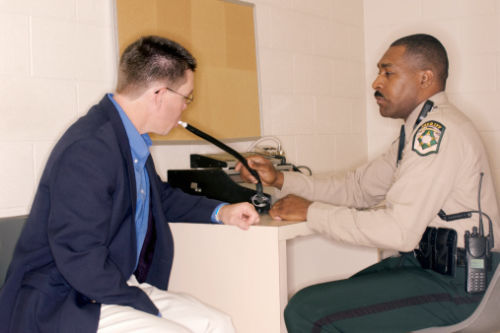 On April 20, 2016, the United States Supreme Court heard oral arguments for Bernard v. Minnesota. This case is about whether or not states can criminalize refusal to take a breath or blood test when a driver is suspected of drunk driving. Let's lay out the players first. We have the esteemed Supreme Court Justices presiding, of course. Kathryn Keena is a Minnesota County Attorney, Thomas McCarthy representing North Dakota, Ian H. Gershengorn for the United States (supporting the states), and Charles A. Rothfeld for the drivers.

This case is a consolidation of two North Dakota cases and one Minnesota case. A Minnesota driver and two North Dakota drivers were arrested for OVIs. All three arrested men contested the constitutionality of being punished by the state for refusing to take breath or blood test. They said it amounted to a warrantless search and a violation of their Fourth Amendment rights.

Central Issue at Oral Arguments: Should a Breathalyzer or Blood Test When Suspected of DUI / OVI Require a Warrant?

The U.S. Supreme Court Justices heard oral arguments from all sides. In general, they were critical of requiring a warrant for blood alcohol content (BAC) testing. Both Justice Samuel Alito and Chief Justice John Roberts noted that, in the case of railroad train operators and airline pilots, the law recognized that BAC testing fell under the special needs exception because safety in the air and keeping transportation on railroads safe are compelling enough to justify a warrantless search. Exceptions to getting a warrant are based on some other pressing and compelling reason that outweighs the right to be free from unreasonable searches. A special needs exception here would be based on a compelling need to keep the roads safe from drunk drivers. The fact was brought up that more people die on the road than by plane or train, so the justification should be just as compelling. Justice Kennedy noted that since innocent lives are at stake, it seemed reasonable that such testing would fall under the special needs exception.

Among the issues raised was how invasive and potentially painful a blood draw is, compared to a breathalyzer test.

Another issue discussed in the oral arguments was the ease and non-invasiveness of a breathalyzer test. Attorney Rothfeld argued that it is invasive and that neither of the two justifications meriting a warrantless search under a special needs exception actually apply here. Rothfeld challenged the applicability of the two justifications: (1) ensuring the safety of the arresting police officer and (2) preventing the arrestee from destroying evidence within reach. Justice Kagan countered that, in fact, it did seem like the breath test was meant to prevent destruction of evidence. After all, the passing of time does slowly destroy the evidence, as it would have been, at that state in time, the Court reasoned.

During the oral arguments, another issue brought up was whether or not it took too long to get a warrant when seeking blood alcohol testing. Some states take longer than others. In states that take a shorter amount of time, it can be 10-15 minutes, whereas in other states it can be 60 minutes. According to attorneys, the difference is due to availability of technology and infrastructure. The Justices were not especially moved by that argument. Should requiring a warrant rest on whether or not states simply chose to make the effort to get warrants faster or not? Keena, the attorney for Minnesota, mentioned that many breath tests are done at the police station. So, the Justices asked, why not seek a warrant during the time it takes to drive the arrestee to the police station?

Justice Breyer noted a distinction between blood and breath tests as well. Poking someone with a needle and extracting blood is much more invasive and painful. Seeking a warrant to take blood seemed more reasonable to Justice Breyer.

Could This Affect Whether I Can Refuse a Breathalyzer Test in Ohio?

Ohio does not criminalize refusal to take a breathalyzer test, but this does not mean there are no consequences for refusing. In Ohio, you are deemed to have given implied consent to be tested by blood, breath, or urine if an officer pulls you over with probable cause, and you are lawfully arrested. The test must be taken within 2 hours of being pulled over. This is because the evidence would be most compelling if it is obtained as close in time to the arrest as possible, which is especially true when there is a question of being drunk or not.

If you are arrested and refuse to take the test, you could lose your license. The first time you refuse, your license could be suspended for one year. For a subsequent offense of refusing to take the test, your license could be suspended for 2 years. A third offense could mean suspension for 3 years. Further convictions could mean suspensions for 5 years or more depending on factors such as other convictions, which a judge could use to enhance the sentence penalties.

What Should I Do If I Am Arrested in Ohio for an Alleged DUI / OVI?

If you are arrested, the best thing to do is contact a lawyer. Too many people get the loss-of-license penalties thrown at them because they did not know what to do once arrested. Contact a lawyer as soon as you can, invoking that right to the police so that you can be protected. There are many ways a trained, seasoned attorney can get bad evidence thrown out and make sure you don't get railroaded.

Wolfe Legal Services provides trusted, zealous criminal defense representation in Columbus, Ohio and surrounding areas. The consequences of a DUI / OVI can be serious and life-changing. Don't leave it to chance. Contact my law office at (614) 263-5297 or fill out the online form.